In 2022 I decided it was time to get back on EME (Moonbounce) again. My old EME dish (taken down in 2004 and now doing its job in Sweden at SM7GVF's place: SM7GVF Dish) was an 8 meter dish, it worked fine and was mechanically ok. During the last 18 years, things have changed a lot, modern 3D design tools have arrived etc, and I have gained a lot more experience.

This time I will do a 7 meter dish. My oldest dish was 5 meter, the last one was 8 meter. The 5 meter dish was very easy to handle and construct, the 8 meter was a lot more to handle! Both the construction and especially the mount needed for it. So, this time 7 meter is the solution :)

When doing parabolic dishes in this size, the biggest job is not the dish itself (although this is also a monumental task) but rather the mount (Az/El) and the general tower construction. The forces on the dish in a severe storm can be extreme so clever design and carefull planning is needed.

For the mount and azimuth/elevation I will be using "Slewing drives". These have gained more and more popularity within the EME community, they are readily available (from China) and the prices are pretty fair. The forces they can stand (according to their datasheets) are pretty impressive. More on this later on.

The tower structure will be designed so it is possible to lower the dish/mount to the ground using an electrical winch. This will make it much easier to service the system later on (this idea I got from Eddy - ON7UN).

The contents on this page will be updated, the design is not fixed yet, it is a work in progress. There are also some things that are not yet designed (mounting of the feedhorn etc). This will be done along the way..

During the design, I have looked a lot around on the internet for ideas and hints of construction, especially Eddy - ON7UN and Zdenek - OK1DFC, has both been great inspiration! 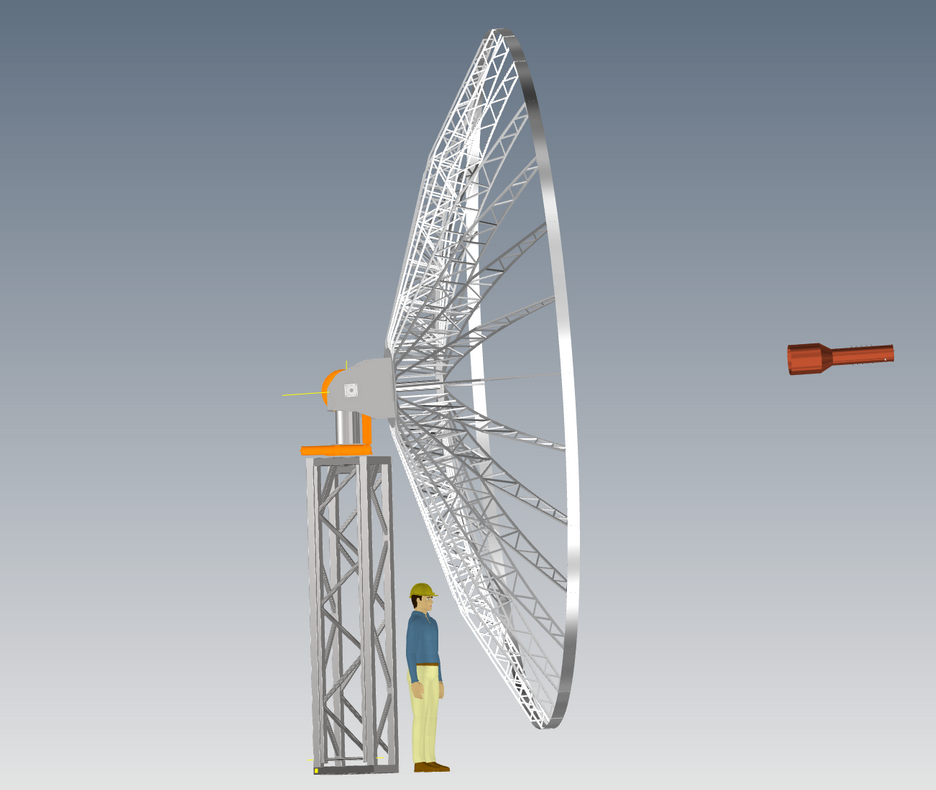 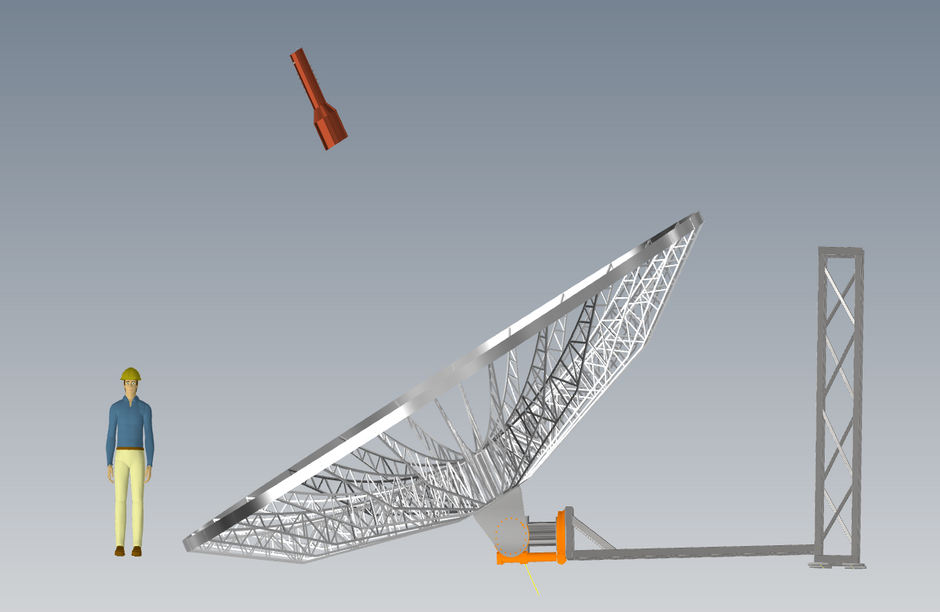 The design of the system is done in Autodesk Inventor. I have tried to use as many parameters for the design as possible. Changing only a single number, I can alter the height of the central hub, this will also change the distance from the surface profile in the dish to the support brace at the back of the dish etc. The cross bracing in the ribs have also parameters that control the reduction in length as well as the "spacing" between the ends where they meet at the surface and support tubes. As the ribs will be TIG welded (I will have to learn this, have never welded anyting in my life :), it is nice to be able to adjust the spacing and offset.

As the mount (Az/El) is a key component in a large dish system, I have this time chosen to use "Slewing drives". These are from Coresun in China, and have some pretty impressive specifications! The holding torque, axial/radial load and the tilting moment are all very high. There is no comparasion between these and a "traditional" rotor system for Ham use.

As I have been into embedded electronics and software for 38+ years, I will do the control system for the dish myself. It will be based on a i.MXRT1064 (600 MHz Cortex M7) from NXP, a TFT screen, Ethernet and a few other gadgets. The same system will be used for my satellite system. I will also implement protocols in the controller so the usual "tracking programs" can control it. More on this controller here.

The construction started with the design of one of the ribs. The construction has to be light and at the same time very solid. It is important that the surface for the parabolic is precise and that it is able to withstand forces placed on it.

The surface and the support tubes are both 20x20x2 mm aluminium tubes, the cross members are made of 15x15x2 mm aluminium. This leaves 2.5 mm for the TIG welding.

At the rim of the rib, a cross member is mounted with 2 x 7mm holes, this will be attached to the "rim-ring".

My previous dishes has all been using aluminium plates and pop-rivets to connect the cross members to the surface and support tubes. This added a lot of weight and was a big job (the 8 meter dish used 7 m2 aluminium plates and around 10.000 pop-rivets! This time the cross members will be TIG welded to the surface and support tubes. I have invested in a "Everlast Lightning MTS 225" mixed MIG, TIG and Stick machine. 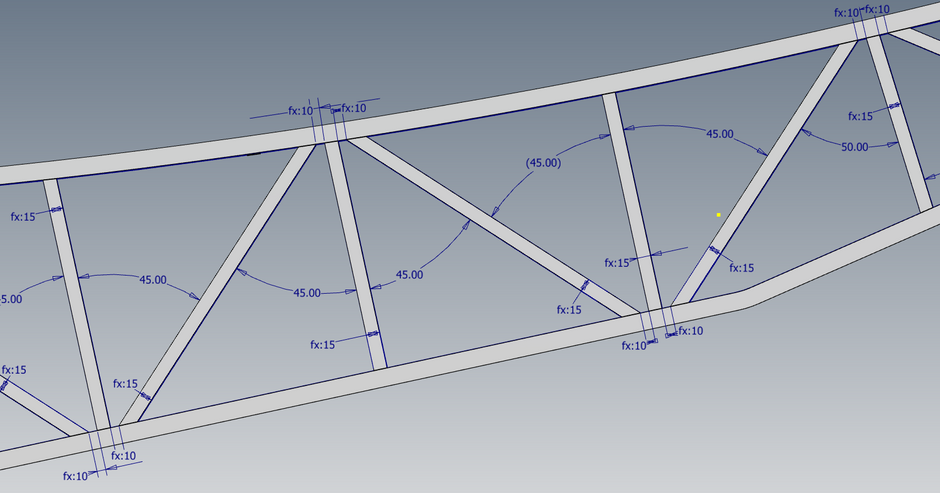 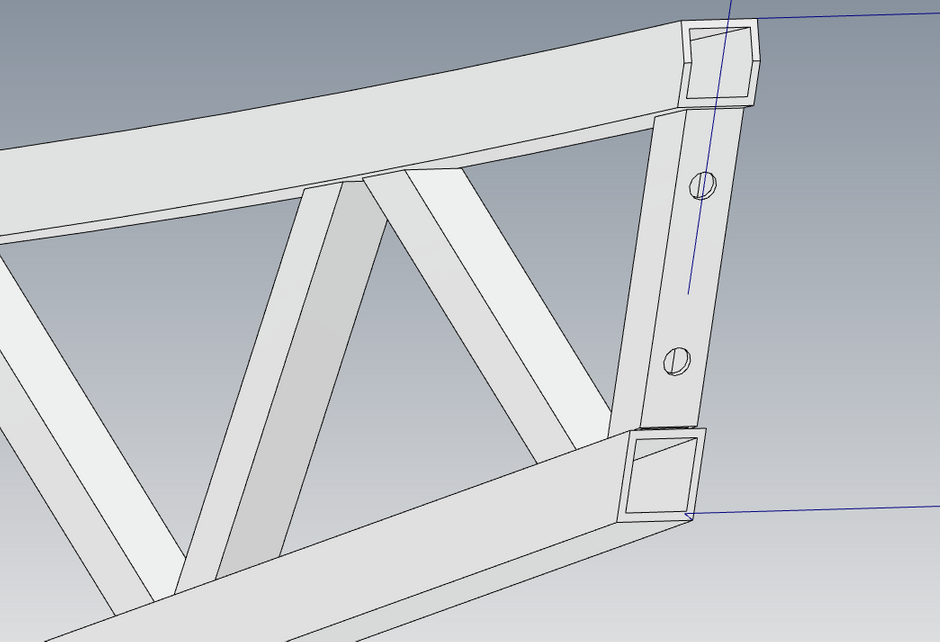 I will do my best to catch up with the description, stay tuned.